How many of these names do you recognize: Destiny Watford, Marilyn Baptiste, Helen Slottje, or Kimberly Wasserman?

These are the four most recent winners of the Goldman Environmental Prize for North America. They are women doing the unthinkable. Watford halted the production of an enormous incinerator next to public schools in south Baltimore. Baptiste defeated one of the largest gold and copper mines in British Columbia, preventing it from destroying a lake that is a spiritual anchor in her community. Slottje provided legal services to small towns across New York to pass local bans on fracking. Wasserman shut down two of the United States’ oldest and dirtiest coal plants, both located on Chicago’s southwest side. This way of putting things distorts these stories in two important ways: the acts described here were neither the work of the solitary activist, nor did they happen overnight. These leaders worked with their communities for years to build coalitions that would enhance the lives of those communities from the inside out.

Kimberly Wasserman made these points exquisitely clear in her keynote interview at the 2017 Wild Things Conference in Chicago. In front of nearly 1500 people (with hundreds on the wait list), we heard about the trials and transformations of her community. We heard about the years of community members and activists knocking on doors and listening to the stories of neighbors. We heard about an alderman who privileged a couple thousand dollars in campaign donations over the 41 people who died prematurely each year because of the coal plants. We heard about the Clean Power Ordinance that helped shut down the plants, and we heard about “Jardincito,” a community-designed urban nature play space. We also heard about new challenges in the neighborhood, including expansions in manufacturing that will bring more than 500 diesel trucks near an elementary school, exacerbating the air pollution already present. It was the kind of inspired, charismatic talk that makes folks want to get involved.

Even before this well-meaning group of conference goers could make a donation (which, of course, the Little Village Environmental Justice Organization would gratefully receive), sign up to volunteer, or take a tour, Wasserman asked us: What are you doing in your community? We got ours. How can you get to work in yours?

In my neighborhood, we have a fledging community garden. We have been trying to get something growing — with both greater and lesser successes. I have tended to fall on the side of lesser success. The first year, there was the squash plant that colonized the entire garden; the second, there was the complete carrot crop loss. Carrots were the only thing I planted.

Wasserman’s question made things painfully clear: I’ve been trying to grow the wrong thing. Initially, the raised beds were installed as a way to cultivate relationships with our neighbors. The tomatoes were supposed to be secondary. The newly-arrived seed catalogs are sitting on the same desk from which I am penning this post. However, the seed of another question has already been planted: What needs to change for the next growing season so that relationships with my neighbors take precedence?

The garden itself is in the Woodlawn neighborhood on Chicago’s south side. It is in between a vacant elementary school that was closed in 2013 as part of one of the largest mass school shutdowns in US history, residential homes and condo buildings, and a triple-wide sidewalk known as “concrete park.” The neighbors surrounding the garden are an eclectic bunch: long time residents, short term renters, some who are affiliated with the nearby University of Chicago, many who are not, families in all shapes and combinations, and relatively diverse in terms of race and class. Some neighbors (like me) were enchanted by the towering row of 8’ tall sunflowers that flanked “concrete park” – some were not. To me, it seemed they couldn’t see the flowers for the bees. If relationships with neighbors take precedence, perhaps the sunflowers go on an extended crop rotation because in the end, we are trying to grow a meeting place. 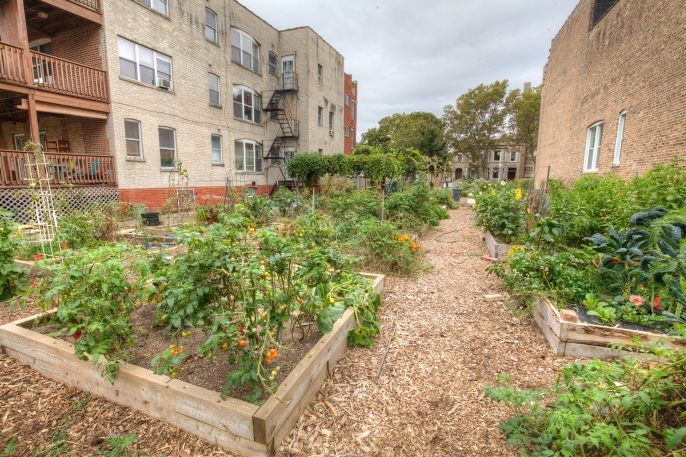 The resistance garden has become a working metaphor for the critical pedagogy behind the courses I am teaching as part of The Enhancing Life Project. Patricia Hill Collins’ On Intellectual Activism (Philadephia: Temple University Press, 2013) was the original inspiration. Her reconceptualization of race, class, and gender as categories of analysis are not uncontroversial, and the scholarship has evolved since her original publications. However, she was a key source for my attempts at building syllabi that aim to teach for change as we explored the book of urban nature through natural history, urban ecology, Christian theology, and spiritual formation.

As with the squash and carrots in the community garden, my “lesser successes” in the classroom have still been successes. They still teach lessons. In the community garden, these lessons have been about building up community, rather than about the bounty of crops. In the classroom, these lessons have been about building up learners who can build coalitions across difference. The initial syllabus still evidenced too much voyeurism and academic colonization. There were token changes in the reading lists to diversify the voices represented, but it lacked the structural, epistemological interventions that challenge injustice in the very production of knowledge. Now, another question has been planted: what needs to change so that next semester students learn to build coalitions across differences so that they can effectively work for social justice? This is the educator as a resistance gardener. The answers to this question take different shapes in different learning communities but they are at the heart of a critical pedagogy for The Enhancing Life Project.

Note: Re-posted with permission from the Enhancing Life Project Blog.